The current edition of the newsletter is available in the members’ area of the website.

Read about what we have been up to over the last 20 years in our past newsletters below. 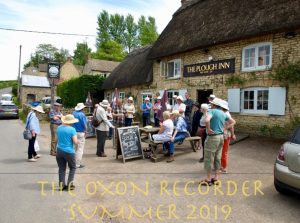 OBR news | Forthcoming AGM | The beauty of cob | Book review, and further comment | Where are they? | Dendrodating elm | A Place in the Sun | Forthcoming events: OBR AGM Crowmarsh Gifford Sun 15 May and Oxfordshire Past Day Abingdon Sat 4 June

Newsletter news | A walk around Bloxham | Two pleasure palaces in west London | Vernacular buildings in Brittany | John Branche; carpenter – and innovator? | In praise of Ballenberg | Scotches: What were they for? | How many trees to build a house? | Annual General Meeting | Forthcoming events