Date Stones and other Inscribed Dates 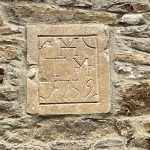 The OBR are developing a gazetteer of inscribed dates in Oxfordshire and the surrounding counties.

The objective of the project is to produce a record of what survives, and to create a resource for researchers and historians. Many of the date stones are eroding away with a large number already lost, so our aim is to record what is there as a record for the future. This will be as a photographic and textual record of the feature and will be freely available to the public through this website. The data is stored in spreadsheet format which allows researchers to sort and group records by location, date etc.

People are welcome to use this material, provided that the OBR is acknowledged as the source (or a third party if there is a link to another website).

The link below opens the latest database for Inscribed Dates in Oxfordshire. This is in a spreadsheet file which will open in Excel or an equivalent program. The spreadsheet will be updated as more data is collected. The current version is dated 7th April 2022.

The data is far from a complete record of all existing examples so we welcome further contributions.

Now that the ceremonial laying of a foundation stone has rather gone out of fashion, its place has been taken by the ‘opening ceremony’. There is usually a plaque to be unveiled, with the date (of course) and the name of the person performing the ceremony. It is also an event with a considerable potential for Murphy’s Law to apply (if it can go wrong, it will go wrong), though thankfully not for OBR member Vic Allison, who, when he was deputy surveyor at Oxford University, had to organise the unveiling of a commemorative plaque in 2001 by (ex) President Bill Clinton at the Rothermere American Institute in South Parks Road. But it was a close call – the curtain refused to budge when Clinton pulled the string, thanks to Vic’s addition of extra Velcro because of the windy conditions. Vic shouted ‘pull’, and thankfully for all concerned this did the trick – and the stone remained poised on the parapet. The consequences if it had crashed down on to the surrounding dignitaries do not bear thinking about.

The most famous example in Oxford was the breaking of the key in the lock at the New Bodleian when King George VI tried to open the door in 1947.

And the Covid pandemic has also taken its toll – a last-minute requirement to self-isolate meant that Chancellor Patten was unable to unveil the plaque at St Hilda’s new building in September 2021. The plaque bears his name, but has not been set in place. The world awaits the college’s decision – whether to replace the plaque with a new one, or just leave its niche empty.

Opening ceremonies are occasions for congratulation, recognising the efforts of all those associated with the building, including its sponsors, architects, builders and owners. Receptions or dinners are obligatory, musical entertainment less so. Few opening ceremonies, however, can match those of the Old Gaol leisure centre in Abingdon in 1975, when its owners, the Vale of White Horse District Council, put on an eight-day festival, commemorated in a booklet printed for the purpose. It began on Friday 29 November with the formal opening by the chairman of the district council, Councillor E J S Parsons, B.Litt, M.A, J.P, and the Duke of Edinburgh sent a congratulatory message, and was scheduled to turn up for an ‘informal’ visit on 5 December. Sports, music and arts events were scheduled throughout the period, including performances by violinist Manoug Parikian and flamenco guitarist Paco Pena. Sixty-seven subcontractors were named in the booklet. This was obviously a major event for the Vale, though it had only come into being in 1974 when Abingdon was in Berkshire and the scheme had been conceived and largely built by the earlier regime. The opening event was thus a blatant piece of political appropriation by the new council of the legacy of its predecessor.

With Jesus College’s new building opening ‘soon’, and a number of other big projects getting under way in Oxford, there is much potential for opening ceremonies – and for Murphy’s Law.